Network your way to success - e-book

Charles Ruffolo's Guide to the power of networking 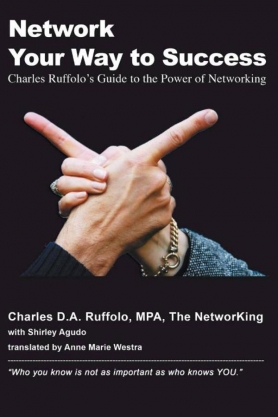 Who would have ever guessed that a small-town, ruffian from Pittsburgh, Pennsylvania would be earning a good living as a self-proclaimed Professional Networker based in the Netherlands, with a following of thousands?

Today, I have not one but three organizations devoted to networking and giving back: RIBS (Ruffolos International Business Services) Network, begun in 1995, wherein I give speeches and conduct custom-tailored network training sessions for individuals and groups; my Network-Club.com, which currently has over 3000 members, providing valuable contacts, networking venues and news; and my non-profit charity, the Giving Back Foundation, whereby mentors help minority high-school students in the Netherlands to explore career options.

In 2000, I held my first Network-Club.com event in Amsterdam with 110 people in attendance. Today those events, which take place eight times a year throughout the Netherlands, attract three times that amount. We expand with franchises to the rest of Europe and the United States.

"Your Wake-Up Call" is your personal guide toward inspiration, motivation and enthusiasm. It's an inside look into... € 7,00